This will be a quick update post. We revisited Heston’s Hinds Head pub in Bray for a quick midweek dinner. We were having some work done with our kitchen so it meant having to eat out most evenings until all the work had been completed. A quick phone call to the pub confirmed that they had a couple of tables spare despite the website saying that they were fully booked, so we headed there gleefully, missing the exit and ending up half an hour late. Despite our lateness, we were still warmly greeted when we arrived which put us immediately at ease. Lesson number one for front of house staff – when your guests are late, it is not often that they do it intentionally so a warm greeting will greatly put them at ease as they already feel bad that they are late. 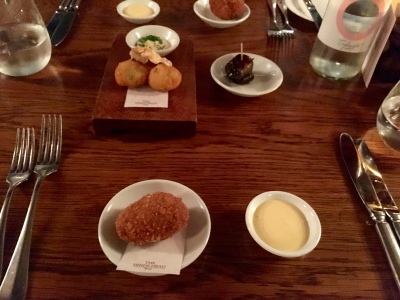 After being shown to our table, I quickly placed an order for a couple of snacks we could nibble on while looking at the menu. Their signature scotch egg was as good as it was previously with moist meat and a runny quails egg yolk. I do actually enjoy the mustard mayonnaise that it comes with although my wife found this an unnecessary addition. Cod brandade were two ping pong ball sized nuggets of tasty fish cakes with aioli to accompany it. There was also some crispy fish skin which always make for a tasty snack although they had a slightly leathery texture for some peculiar reason. Finally a classic devils on horseback was pleasant with jammy sweet prunes and salty bacon. 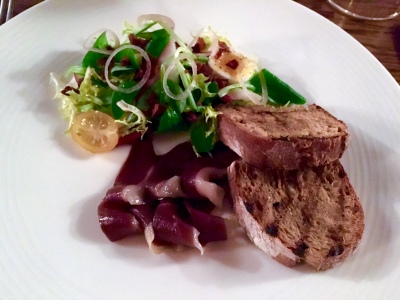 For starters, I tried the powdered duck ham served with some toasted sourdough and a salad of quail’s eggs and duck scratchings. The term powdered is a term from the old English cooking which represents the curing process it undergoes. Here, the duck breast is salt-cured with a mixture of herbs and spices before being air dried. The duck ham was certainly very tasty but not more so than what you would get from a good charcuterie. 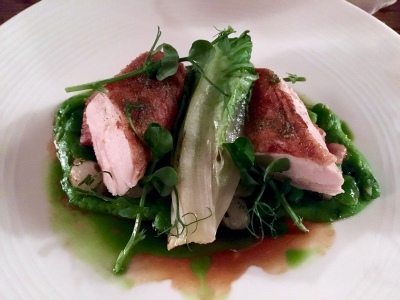 I tried the chicken and lettuce – a dish which also featured on the menus at Dinner. Chicken breast (from Cotswold Whites) are taken off the crown, rolled into a ballotine (probably with the help of a little meat glue) and cooked sous vide. The ballotine is finished in a pan to crisp up the skin. Undoubtedly the sous vide cooking process allows the chicken breast to stay moist and the chicken itself had a reasonable amount of flavour. On the base of the plate is a pea puree and a garnish broad beans and pickled baby onions for acidity. Yet again another tasty but pleasant plate of food. 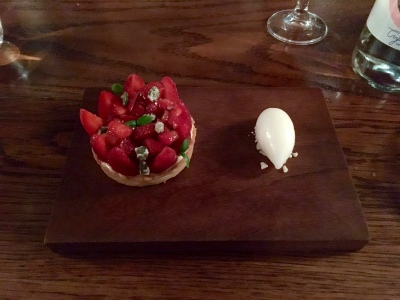 At this point, we were both feeling very full, and my wife threw in the white flag. I soldiered on and finished with a strawberry tart (this meal being at the end of September) with a very well made elderflower sorbet. The pastry was fine and the strawberries themselves had decent flavour making this yet another pleasant plate of food.

I am aware that I have used the word ‘pleasant’ multiple times during this write up. I think this sums up exactly my meal here. The cooking at Hinds Head is capable and because of Heston’s methodology, will always be consistently executed. It is tasty grub for sure, but it also feels very clinical. I doubt the head chef here has very little say in the design of new dishes as each plate of food here probably has to undergo rigorous testing at their developmental kitchen. As a result, much like the Fat Duck down the road, the menu here is very slow to evolve. I love Heston’s food and although my meals at Hind’s Head have always been very pleasant, they lack excitement. There I go using that word again…. 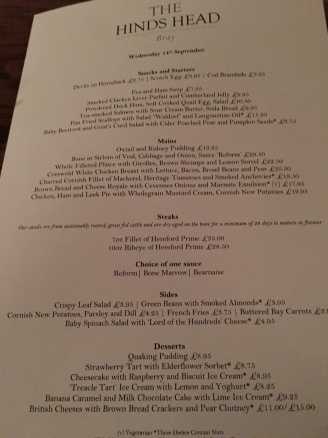 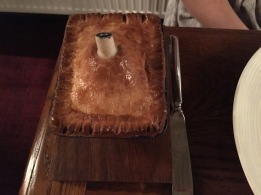 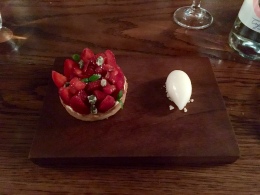