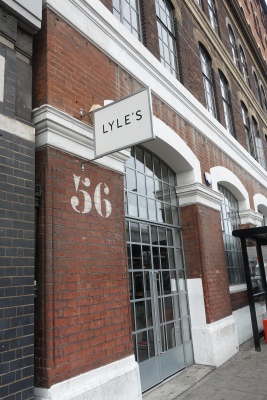 If Lyle’s were to be in Australia, it would not feel out of place. The dining room is hip and trendy and the plates of food pretty and minimalistic. But this is not just any casual dining place – Lyle’s is ranked number 65 in the World’s 50 Best Guide and was also awarded a coveted Michelin star in the 2016 guide. Chef/ owner James Lowe has worked at La Trompette where he has picked up solid classical French training before stints at Fat Duck and more recently the head chef role at St John’s Bread & Wine. It is probably his time at St John’s which most influences his style of cooking – minimalistic simplicity, based on less fashionable cuts and ingredients, but no less delicious.

We dined at Lyle’s for a casual Saturday lunch prior to heading to the West End to watch a film. At lunch, the menu is based on the popular small plates/ sharing concept. Starters are priced between £7 – £11.50, ‘mains’ around £20 and desserts £5 – £6.70. Although this may look cheap, the bill racks up very quickly after a few plates. We ordered 4 starters, the two ‘mains’ on offer (one fish and one meat) as well as all 4 of the desserts on offer. At dinner there is just one set menu available at around £44.

END_OF_DOCUMENT_TOKEN_TO_BE_REPLACED

This work is licenced under a Creative Commons Licence.