I have to admit, visiting Bo Innovation was never been top of my list whenever I go to Hong Kong. And I have visited Hong Kong plenty of times. Even when the restaurant was promoted to 3-stars, I still did not get the urge to visit. I think part of it was because of the reviews I have read on the internet stating how bad the restaurant is, how undeserving the restaurant was and that Michelin had gone completely bonkers. The other reason perhaps is that chef Alvin Leung is one cocky bastard. Others would say he is self-confident. He has given himself the moniker of ‘Demon Chef’ (he even has it tattooed on his arm in Chinese) and dubbed the style of cooking here X-treme. I think it is easier for people to like a chef who is humble than one who is full of it. And then, there is of course his restaurant in London which was a complete, abject failure. Even though it received a Michelin star, Bo London closed less than 1 year after opening.

More recently however, the blog write-ups of Bo Innovation have been more positive. Some were even glowing. Plus you know, he did get the thumbs up from Bourdain at some point in the restaurant’s existence. As such, I decided to bite the bullet and have a punt at a meal here. If I was going to give this restaurant a shot, the only way was to go for the chef’s table and the full works tasting menu. Admittedly this is a huge punt with the chef’s table menu priced at HKD$2,380. That’s £215 with today’s abysmal exchange rate. 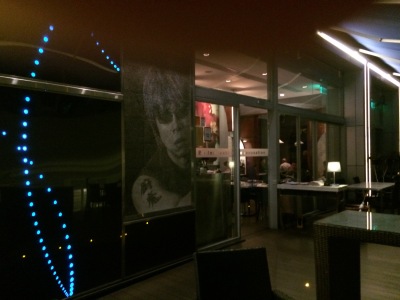 Finding the restaurant is tricky business in itself. Although the official address lists the restaurant as being on Johnston Road, the actual entrance is actually located on Ship Street. There is a very small (and I mean very small) sign post (located opposite Akrame restaurant) which directs you to an elevator that takes you up to the restaurant. It is easily missed. You almost feel a sense of achievement just getting to the restaurant.